Less than 40 percent of teen mothers graduate high school, and the odds of completing college are far more dismal. Fewer than 3 percent of foster youth earn a 4-year college degree. Nationwide, first-generation college students drop out at more than double the rate of students who had parents graduate college. 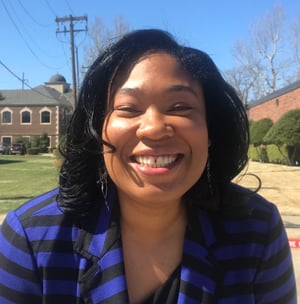 But Latasha Howell has dedicated her life to beating the statistics and helping others do the same.

As a child, she was surrounded by drug use and prostitution, eventually spending time in the foster care system where trauma continued. She was on her own at 15, a teen mother finding her way in the world that had shown her hardship after hardship.

Ultimately, Howell said she formed negative beliefs about herself, and when she thought about going to college, “trying to overcome those doubts in my mind was tough.”

During her first class, Howell said, “I was absolutely terrified. I couldn’t think, I didn't know what I was doing, I felt so afraid. I was able to finish the class, but I barely passed.”

Howell took that time to take care of things in her personal life so when she returned to college, she would be ready. She got set up to return to college, only to learn that her mother had died.

“The advisor made me feel comforted and supported during that time,” Howell said. “I knew I was supposed to go.”

She was still afraid, but determined to get her degree. “In my first class, my teacher complimented my writing and said, ‘I know this is your first class, but you need to go and take your master’s.’”

Easily dismissing the comment, Howell went on with her program, showing up to class, working through the assignments, and growing closer with her cohort, a group of students who attend each course together in the degree program.

And then she got the message again: “Another teacher told me, ‘If you don’t do anything else, you need to keep going and get your master’s.’”

Taking the comments to heart and leaning in to her love of learning, Howell enrolled in the Master of Science in Management program.

“I got done with my bachelor’s in October, and in November I started a master's program,” Howell said. “I knew if I didn't go then I wouldn’t go at all.”

Although she had been through her undergraduate degree, she continued experiencing doubts as she moved to the “unchartered territory” of graduate education.

“I’m in my master’s program freaking out because it’s completely different than when you get your bachelor’s,” Howell said, describing it as “another challenging step above.”

Class after class, she showed up, even with continued feelings of inadequacy. “But my cohort were all texting together, saying things like ‘you can do this,’ ‘keep going,’ and ‘it’s okay.’ And my teachers said, ‘No, you do belong here.’”

She proved just how much she belonged by graduating with her master’s degree with honors. “I graduated every class with an A,” she said. “I never got a chance to get those honor cords when I was in high school.”

Howell was even chosen by her class as the speaker at the commencement ceremony.

After graduation, she will continue her work with the Lilies and Reeds Society, which she founded to empower and support teens in the same situation she was. Her degree both gave her necessary skills and proof that anything is possible. It also allowed her to show her daughter the world of higher education, and now her daughter plans to attend SNU in the fall.

“For a long time I let my past define me,” Howell said, “and I was able to learn through this that I’m a bridge builder, I’m a change maker, and I’m a cycle breaker.”