Growing up in Eastman, Georgia, a small town outside of Atlanta, SNU was probably the last place Derrick Gillis expected to end up. But life changed when he and his mom moved from Georgia to Houston,Texas. 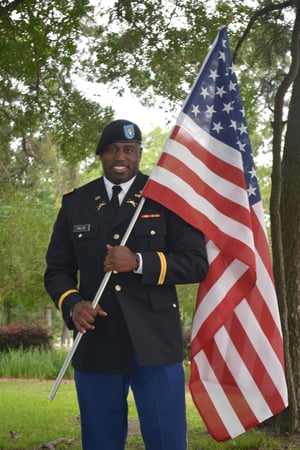 Living in a single-parent household was difficult, for both him and his mother, but Gillis was close to his uncle and relied on him as a father figure. Tragedy struck in middle school when his uncle passed away, and Gillis said he leaned on athletics to fill some of the gaps that loss created.

“I had to figure a lot of things out on my own, so I started leaning on my coaches,” Gillis said.

Ultimately, his skill and dedication earned him a football scholarship at SNU. While Gillis pursued his studies and collegiate athletics, his mother encouraged him to pursue a military career as well.

“I didn’t want to enlist,” Gillis said. “I didn’t want anything to do with it. I was sold on trying to play football. When I got to SNU things changed.”

As he grew closer in his relationship with Christ and spoke more with mentors, he began to understand the similarities that existed between athletics and the military.

“It’s kind of like being on a team,” Gillis said. “When you’re in the military, everybody plays a role in something that you’re doing, from being at basic to the time we’re in the barracks and in the field.”

He joined through the ROTC program and undertook basic training during the first summer of his MBA degree program.

Going from being a student athlete to a graduate student with a career is a big shift, but Gillis said, “The main difference was that now I had more on my plate and knowing when I finish school I have a career.”

May 2020 marked Gillis’s graduation from his master’s degree program, making him the first person in his family to complete a collegiate degree at both the undergraduate and graduate level.

“I come from a poor family, we’re from a small country town. We had nothing. So for me to be able to inspire myself or my parents, I get to inspire the rest of my family and I get to help people.”

Not only did he earn his degree, he also earned a promotion within the Army to second lieutenant. This promotion places him in a leadership role over multiple soldiers with more decision making capabilities and increased pay.

“My whole objective with the military is to be able to go back home and give back to the community, so it’s a big accomplishment,” Gillis said.

Now that he has graduated from SNU, Gillis will continue his career in the military in the hopes of moving up the ranks and serving his community along the way. As he looks back on his time at SNU, Gillis said he is thankful for the “opportunity to connect with God on another level."

We are excited to see all he will accomplish with his education and the skills he has built along the way. Congratulations, Lieutenant Gillis!